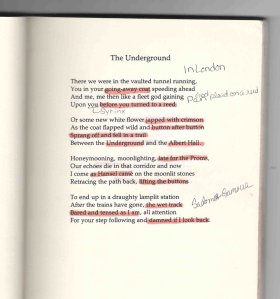 I would love to meet the previous owner of my copy of Station Island. The marginalia surrounding some of the poems reveal a man of erudition – an erudite detective to be exact – and this detective uses his immense learning to solve the mystery of a poem’s meaning.

This is how I imagine him as he reads The Underground, the opening poem of Station Island.

He goes through the poem before writing his marginalia. He ponders on the following phrases: ‘vaulted tunnel’, ‘underground’, ‘Albert Hall’, and ‘the Proms’; he notes that the poet Seamus Heaney is Irish.  Drawing on his knowledge of geography and places, gleaned perhaps from his immense collection of travel books or from his frequent use of the subway of various European cities, he concludes that the setting of the poem is London. He writes the phrase ‘In London’ between the title and the poem.

He goes through the poem again, and he encounters the phrase ‘And me, me then like a fleet god gaining/ Upon you before you turned to a reed’ He loved Greek Mythology as a child, and knows that the lines allude to the God Pan and the nymph Syrinx, who was turned into reed by her sisters to conceal her from the lascivious deity. He writes the phrase ‘God Pan plaid on a reed’ beside the lines. He underlines ‘you’ and writes ‘Syrinx’.

He reads the lines ‘Our echoes die in that corridor and now/ I come as Hansel came on the moonlit stones/ Retracing the path back, lifting the buttons’ but refrains from scribbling. A pedant sitting beside him observes his omission and chastises our learned poetry reader, ‘You did not write Hansel and Grethel. You should have written Hansel and Grethel by Brothers Grimm.’ He eyes the pedant and smirks, then ignores his presence by going back to the poem. Life is too short to spend belaboring the obvious and debating fools.

Finally he goes to the last stanza: “To end up in a draughty lamplit station/ After the trains have gone, the wet track/ Bared and tense as I am, all attention/ For your step following and damned if I look back.” He mused on the words ‘damned if I look back.’ As a young boy in a Catholic School, he studied the Old Testament – which he hated and considered inferior to Greek Mythology; now, he finds his knowledge of the saga of Abraham handy. He tells himself, Lot’s wife was damned for looking back, turning into a pillar of salt. He scribbles ‘Sodom and Gomorra’ above the thought-about phrase.

I am now reading The Underground with marginalia surrounding the poem. What appears to be a mere vignette of lovers running in an underground tunnel to attend a Proms concert at Albert Hall is, in truth, a scene redolent with myth and folklore. I am grateful to this unknown man who listed down all the figures alluded to by the poem; this is one of the few instances I read a poem without bothering to consult Wikipedia.